Memories of Love and War

They named it a desert,
while it was fertile and green,
their demagogy spread across the streets,
leaving no room for peace.

A child loudly screamed,
as He saw his mother moaning,
They came with greed,
They did steal the morning.

A man faithlessly said:
take my white flag but keep them alive,
You can kill me,
leave them alone they may get to chive.

The ashes are gathering rust,
waiting for an ending for their tumult,
two enemies galloping to kill,
they may not seem so yet they are brothers.

I have so much to write about how Fujifilm cameras have changed the way I shoot and how DSLRs are starting to feel like strangers to me; indeed it’s no surprise that many people on the Internet are starting to call it the new Leica or Leica for those who are on a budget(or not as rich as Leica owners) 🙂

The interesting(and hateful too!) part about Internet is that as soon as a new gear is released you would see a lot of technical reviews, charts, and performance tests all over the place. Sometimes they do get in the way of our creative minds, so that urge to try new cameras will always kick that mental and emotional areas in your skull and you will keep telling yourself “I want it, I want it, I want it and so on, hahaha”.

Back in May the guys at the grand store Jordan were so generous to give me the Fuji xt1 with a couple of lenses to play with namely the 14mm f2.8 and 23mm 1.4 for about three weeks.

Having used the x100s for a year now, I just felt right at home (that is for the most part, though!).
The next day I decided to take it with me for a tour in Old Amman to unveil what this new fellow can do.

For the next three weeks it has pretty much become my companion and I’ve enjoyed creating a lot of interesting photos, at the end of the review a group of those photos will be shown. I have already posted a couple of them on my Flickr page; again I say it was a pleasure using it.

Until you complete reading the review I’ll briefly explain the important aspects about this camera(in my opinion), what’s missing and the Pros/Cons of using it. I’ll put more explanation on the photos shoulders, I know they will do it better than I do 😉

The biggest thing that improved the experience and right away captivated my senses was the new huge gorgeous viewfinder, it’s the best!!

I doubt anything on this planet can beat it right now, period!! I believe that with the fast development of such enhanced electronic viewfinders, optical ones will someday be obsolete!

When using it, you will simply get immersed in the experience, and things like composition will feel very natural, and a frustration-free experience too!

Compared to the x100s and xe1 electronic viewfinders, I’d say it’s light ages better than theirs!

Implementing the wifi in a camera like this can sound cheesy (at least for me!), but getting to use it makes a whole lot of difference, that is when you have enough spare batteries, as it eats them like kids do with chocolate cakes!  Fuji added a new wifi feature in the xt1 that is the live view on the phone as opposed to only transferring the photos with cameras like xa1, xm1, and xe2. At shooting I was able to tether all my photos to my IPhone in a few clicks, and the live view seemed to work just fine.

One simple confusion that I didn’t run into myself but have seen people going through is that there’s no unified Fuji app for all cameras, this can be very confusing for photographers especially for those who are at my father’s or grandfather’s age. My suggestion is to either make one unified app for all the cameras or give the apps each respective camera’s name right away.

At first glance the IQ felt 100% the same to me, well may be not? ; No, no, no it seemed familiar compared to the x100s & xe1. However I’ve noticed two things: first is its tendency (the camera that is) to smoothen the jpeg files at high iso even more than its older siblings. Second is the fact that the color profiles seemed very different to my naked eyes when imported to Adobe’s Lightroom and I have no idea if it’s Adobe’s or Fuji’s intention to do so.

With this camera you can literally shoot anywhere and under any lighting condition, when photographing the street I tend to put the ISO on auto maxing it at ISO 6400.

Speaking of high ISO it’s an absolutely brilliant performer, you will have a good time shooting as high as ISO 3200 and 6400 without having to get Canon or Nikon hateful color noise (No offense I love ya both!).

Auto focusing is cumbersome for many but not me. You can auto-focus anywhere and the camera will grab like 90% of the shots quickly based on the subjects of course, I read that M43 system new cameras are faster but the xt1 is ok for me; compared to my entry-level Nikon DSLR the xt1 feels way faster and more responsive, I know it’s weird but this is how I feel, my DSLR is not faster!!

One problem I’ve faced though was that sometimes the camera would act as if it’s auto-focused correctly but it isn’t which can mean a lost shot that was thought to be a keeper. I’m not saying that the AF is unreliable, NO!!! instead Fuji should be aware of this, it might be my fault it might Fuji’s, either way Fuji has to double check this problem and I’m sure it can be fixed quickly.

Image quality: The only APS-C sized sensor worth comparing to Full frame,
Despite its SLR design, it still feels quite more friendly on the streets than a DSLR,
Fairly fast AF performance,
Fast and responsive,
The body appeals to classic and modern SLR shooters.

Cons:
The buttons feel kinda flimsy,
Although they feel luxurious; the ISO, drive mode and shutter speed dials can be difficult/sometimes FRUSTRATING to use because of the locks implemented on them.
The titling LCD doesn’t feel secure when tilting.

All in all I was very pleased with what the Fuji xt1 is; indeed it has many advantages over the x100s and the xe1 as far as performance is concerned; however if you are accustomed to shooting with a rangefinder style camera, your experience will drastically change, I understand that Fuji has designed this camera for DSLR oriented shooters and this is why it gets a completely different design compared to its other siblings.
If I were to choose between it and Nikon Df/D7100/610 for example I would have straight away gone with the XT1, it is better, more portable, beautiful and sexier as well.

The photos below were taken form various venues in Amman including Jabal Al-Qalaa’, Rainbow Street, Downtown Amman and Gardens street too. 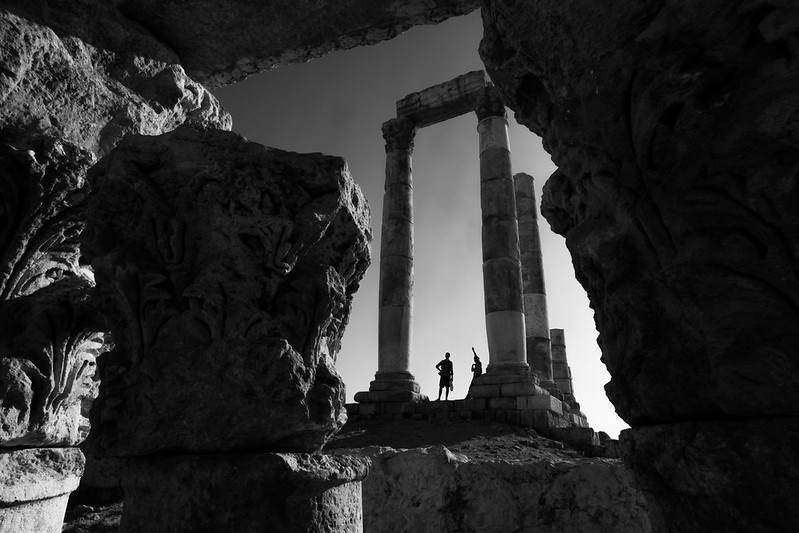 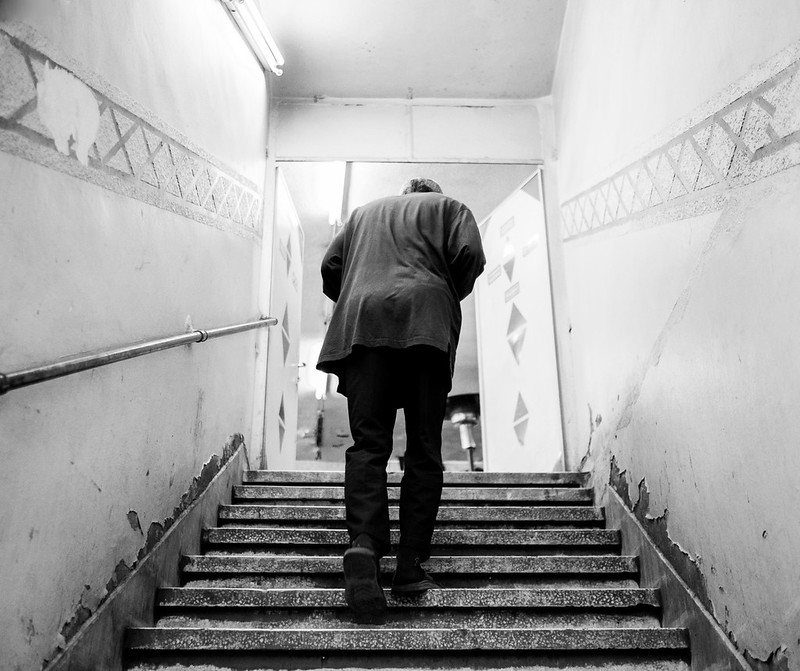 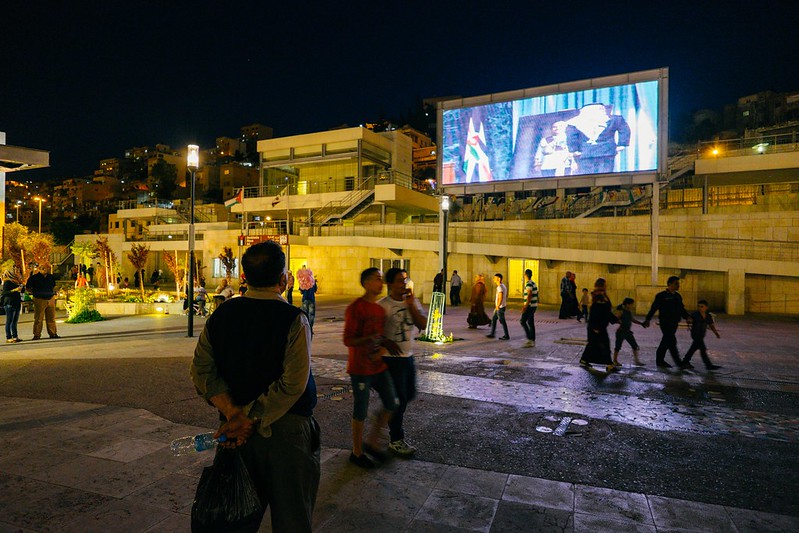 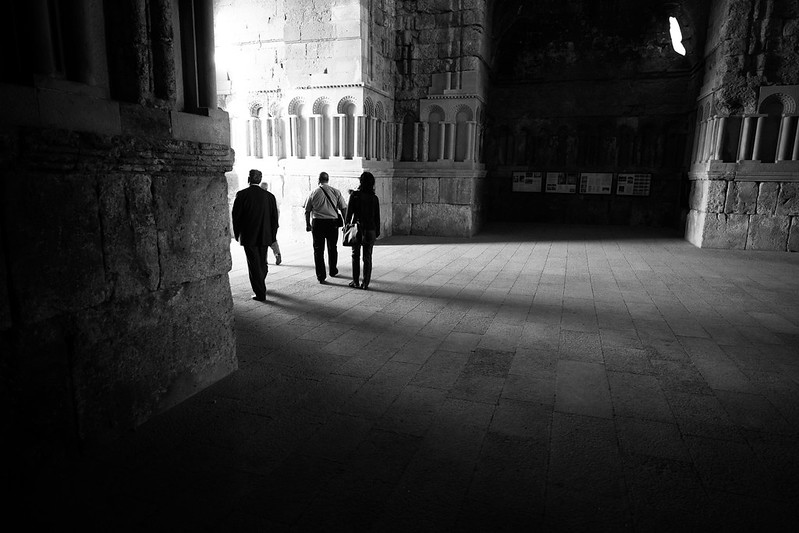 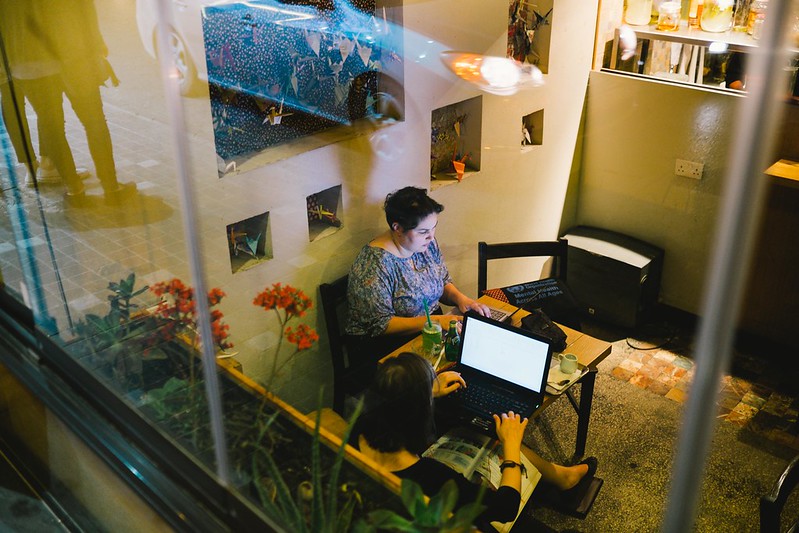 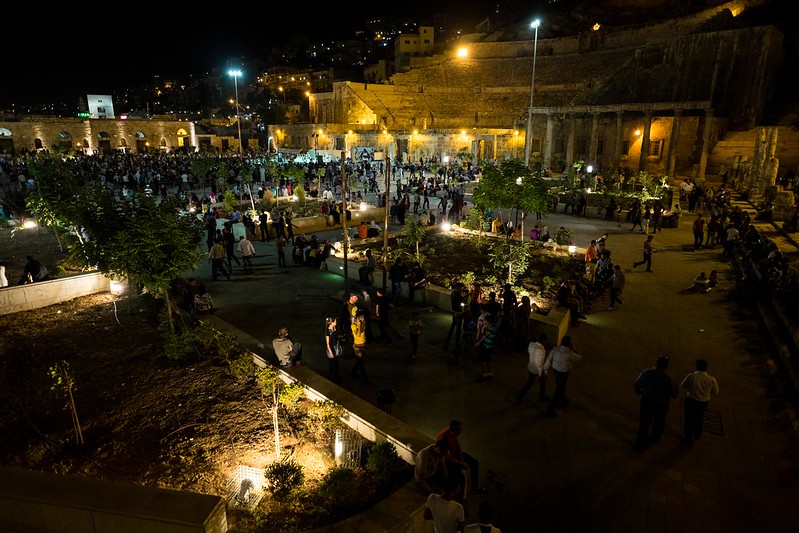 The Hashemite square with the 14 mm f2.8

Al-Abdali Towers, Le Royale and the Jordanian Airlines showing up on the horizon shot with the 23 mm f1.4

A night shot from Jabal Al-Hussein using the 23 mm f1.4

A watch repair technician does his job quite well

The 23 mm 1.4 does help in getting some outstanding environmental portraits

Intriguing look of a tired guy on a bus

Some photos from my university PSUT.

The guy almost had no knowledge of me taking a photo of him, shot using the 23 mm f 1.4

And now doing some Humus in Gardens Street.

And finally a candid from Wild Jordan. 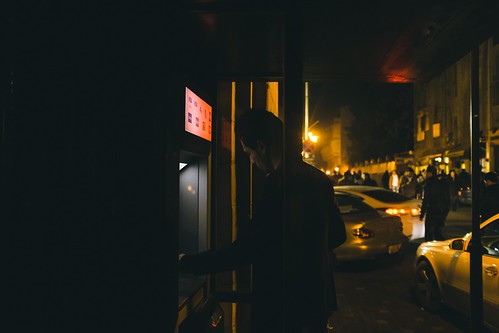 It was eleven years ago,
Craziness went extreme,
Mobocracy became the norm,
topsy-turviness unveiled,
how much a mortal,
can be vile,
when cruelty is a quality,
for those who,
know about modernity,
A flock of crows,
came one morning,
when the skies were,
widely opening and gloomy,
They announced themselves as liberators,
and yes, they were,
but in a middle ages Mongol way,
they came to break the calmness of prayers,
to sniff the smell of peace,
to swig the antidote of life,
to inhale the remedy of hearts,
to kill a new born child,
to rape a virgin girl,
to tear apart a mother’s heart,
and to put repentance in a father’s ego,
Sure, they were liberators and human-beings too! 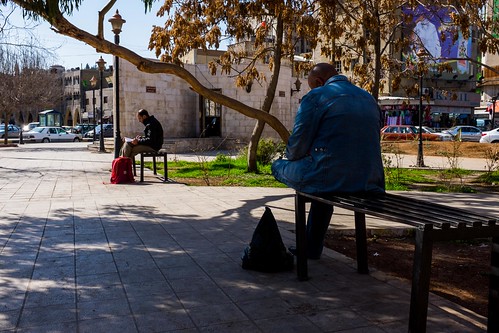 They read,
they try to say we have no greed,
to take people’s blood and let them bleed,
their message does read,
that the good people will someday lead,
and the sun will shine when we get to feed,
those who need and stand for their deed,
I bet it is not difficult when it’s a part of our souls, a part of our creed.

That one common concern 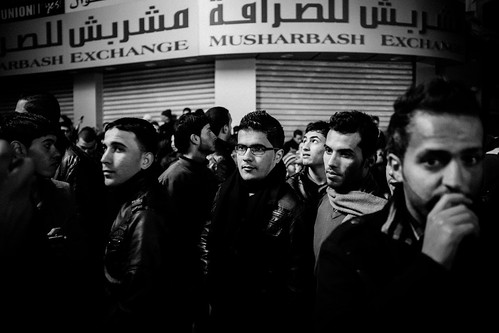 They are mentally separated,
united by one dream,
one hope,
one theme,
They know little about it,
that little is much for now,
tomorrow or may be after,
they’ll know more about it,
by then they will get one big laughter,
that nobody will be able to alter.

It’s spring,
The time of blossoming,
When beauty is so clear,
People like complications,
They don’t get it,
They keep asking,
What on earth is beauty?,
Beauty is a form,
It’s not within bodies,
It’s not animalistic,
It even goes beyond being surreal,
it goes to somewhere,
Where it can rather be,
Sensed without sensing,
Touched without touching,
Smelled without smelling,
At the end it’s beauty,
it’s there,
it’s deep,
It’s full of faith,
It’s not just a matter of touching,
It’s a matter of feeling, loving and admiring.

She is the one! She is Mom!

Which day is enough for one,
who spent nine months pregnant,
Is it enough for  someone,
who has always been constant,
She has always been patient ,
while many times I would become intolerant,
She always cares for me,
and that is what makes me important,
Towards her desires She would ,
completely and ultimately feel indifferent,
Her sacrifices have been,
for human-beings somehow irrelevant,
She always says “Mama, do it, I can help”,
Without even waiting a compliment,
She cooks, decorates, and teaches,
yet she is so pretty and elegant,
That is why God chose her,
to be the perfect complement,
As love in her heart,
is three times any male inhabitant.

Those lines,
so clear,
yet so blurry,
Those lines,
attenuated by memory,
They remember nothing,
but a bunch of photons,
being bombarded,
somewhere in the space.
Life and death,
are immeasurable by them,
Existence and,
Nonexistence,
are irrelevant for them,
Time is almost nothing,
It can be zero,
it can be infinity.

A story of a city characterized by a couple of dreamers

Upon their hearts,
Stands a feeling,
A feeling that can,
Become a healing,
A healing that wipes,
All the smearing,
Their love makes them look,
Like they are appealing,
They don’t lie,
Neither are they revealing,
A secret that can,
make them squealing,
It’s so simple,
They are not stealing,
It’s all inside,
This is what they are sealing.